Psychotherapist Based in Oxfordshire

On Epistemology And The Language Of Dreams Concept

ON EPISTEMOLOGY AND THE LANGUAGE OF DREAMS CONCEPT

An Extract from The Power to Dream: A Philosophical Inquiry into the Hermeneutics of Dream Interpretation (2021)

Nothing is new by the suggestion of the concept of ‘the language of dreams’. It has been oft repeated by both Freud and Jung, and is common parlance. Just as there is nothing new in saying that dreams have meaning, or a message, or a purpose – all this, even when recognized as theory, is taken for granted (“The Practical Use of Dream-Analysis”, CW 16, par 318). The fundamental question in epistemology, however – ‘What and how do I know; and how can I come to know?’ – is concerned with the assurance of knowledge and the method toward the increase of knowledge. Moreover, this question is seen to be reflexive in the sense that it turns back to the knower and queries his foundations and assumptions moving forward. As soon as one’s progress is underscored by self-criticality throughout one’s activity in this way, it is inescapable that what is called for is refinement of one’s terms and definitude of concepts. This is because the clearer and more precise is the communication of our ideas and theories, the more amenable they are to accurate criticism, and the abler will they be to withstand criticism when true or close to the truth. When we say that our project on dream hermeneutics is epistemological in character, therefore, we are aiming to take these two common notions (that we can speak of a ‘language of dreams’ concept and that dreams have meaning) and assess precisely what it is that we mean by them. This allows us to refine and articulate with greater clarity what we mean when we speak of dreams as language and to isolate to the limits of our capacity what exactly in a dream is meaningful, and when and how it is so – experientially. This is the effort that is undertaken in Part Three of this essay. Here, I wish to explain and comment on the technique through which the effort shall be undertaken, a method called Structuralism. This will allow me to introduce the concept of ‘The Language of Dreams’ in the particular sense in which I mean it.

STRUCTURALISM AS METHOD
To begin with the word ‘structure’, Jean Piaget defined it succinctly as a “system of transformations” (Structuralism 1970: 5). This brief definition is far-reaching and profound. Although more typically applied to literary criticism, it affords one of the best portrayals of the dream state in capsule that I could find. In his article on “Structuralism as a Method of Literary Criticism” (1975), Isaiah Smithson praises Piaget for identifying by his definition two vital concepts, ‘system’ and ‘transformations’:

...a system is such that, in the words of Levi- Strauss, "It is made up of several elements, none of which can undergo a change without effecting changes in all the other elements." And by using the term "transformations," Piaget is pointing out that one or more units of a structure, and, therefore, the structure itself, can undergo change, but that the transformed structure will still be recognizable as the same one, or at least of the same class.

As for Structuralism itself as a process or method of analysis, Roland Barthes has contended that it is essentially “an activity of imitation,” involving “two operations: dissection and articulation” (“The Structuralist Activity”, 1963: 2). One can comprehend this explanation by picturing the miniature model of a building created by an architect as a proposed structure for his real life building. The model, as an ‘imitation’ of the proposed real life building, is first ‘dissected’ (or analyzed and measured to proportion), then assembled or, in a literary sense, ‘articulated’.

These descriptions are accurate and penetrating, but nonetheless appear abstract when trying to clearly picture as the model we wish to use in the method of analysis of the dream state that will follow. To put together the essential ideas of structure as a “system of transformations” and structuralism as an activity of “dissection and articulation”, let us borrow from Michel Foucault a definitive depiction from his 1971 interview with Fons Elders: “…structuralism,” he summarized after describing the following graphic, “is the method of analysis that consists of drawing constant relations from elements that in themselves, in their own character, in their substance can change”. 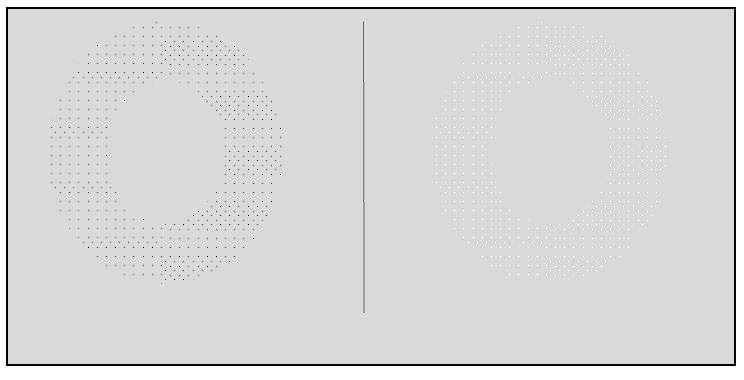 Imagine a photograph representing a face. If you make this image go from positive to negative, in a way all the dots of the picture are going to be modified. All the points that were white will become black and all the points that were black will become white. None of the points, none of the elements therefore remain identical. And yet you can recognize the face. And yet the face remains the same even though it has gone from positive to negative, and you can say that it stays the same; you recognize it because the relations between all these different elements have remained the same. Relations between the points have stayed the same, or the relations of contrast and of opposition between white and black have remained the same, even though each dot that was white has become black and each dot that was black has become white. Deep down in a very broad sense of what Structuralism is, we can say that structuralism is the method of analysis that consists of drawing constant relations from elements that in themselves, in their own character, in their substance can change.

This is precisely the analogy with, and the level at, which I wish to look at the dream state. It is also the best model I have for which Structuralists use to analyze grammatical and syntactical relations in language; and it is in this specific sense in which I speak of the ‘language of dreams’. I do not mean by the Language of Dreams concept that the structure of spoken or written language corresponds on a one-to-one basis with the structure of dreams, or vice-versa. I consider the Language of Dreams concept only in that, both languages and dreams show themselves as self-contained, self-articulated structural meaning systems with constant internal relations – their own morphology and syntax; albeit that those systems and relations may differ between spoken language and ‘dream language’. Grasping this concept is absolutely crucial before reaching comprehensiveness in meaning when attempting to interpret a dream. Without analyzing the internal relations, the space between the words and images as it were (in both dream and language), one shall be stuck within an enveloped world of speculated meaning sets which need have been filled before embarking on the dream analysis. These sets may have been filled by the concept of Desire, as with Freud; or Power, as with Adler; or, in the case of Jung, we might argue, the teleological necessity of Purpose in expressing wisdom for healing. But if one speculates what orientation the meanings should be fitted into before beginning the analysis, then you are not allowing the dream to communicate in its complete act of expression; rather, it is being stuffed with a vocabulary of your own, resulting in a situation where the analyst has excluded all sets of meanings except those which he has invested into the activity aforetime. As Foucault put it:

If we are to allow a dream to communicate with us, we need to do more than bypass its forms of expression, running straight to the vocabulary which we have chosen to begin with; and thus encapsulate the activity by talking to ourselves, as it were. What is required is, first, attention to the structure; and thereafter, how the structure relates to the content – rather than jumping to the content (words in language or image referents in dreams) void of its context. “One might say,” continues Foucault, “that psychoanalysis gave the dream no status beyond that of speech, and failed to see it in its reality as language. But this is both risky and paradoxical…” What Foucault says of Freudian psychoanalysis regarding dream expression in relation to desire applies, as we have mentioned, to Jungian analysis regarding dream expression in relation to ‘the understanding or wisdom of the dream’ and its acclaimed teleological intention: “a theology of meanings”.

The word, to say something, implies a world of expression which precedes it, sustains it, and allows it to give body to what it means. By failing to acknowledge this structure of language, which dream experience, like every expressive fact, necessarily envelops, Freudian psychoanalysis of dreams never gets a comprehensive grasp of meaning. Meaning does not appear, for psychoanalysis, through recognition of a linguistic structure, but must be extracted, deduced, gleaned from a word taken by itself. And dream interpretation, naturally, becomes a method designed to discover meanings of words in a language whose grammar one does not understand: it becomes a method of cross-referencing of the sort used by the archaeologist for lost languages, a method of probabilistic confirmation, as in the deciphering of secret codes, a method of meaningful coincidings as in the most traditional arts of divination. The boldness of such methods and the risks do not invalidate their results. Nevertheless, the uncertainty of the starting point is never entirely dispelled by the constantly increasing probability that develops within the analysis itself…Freudian analysis retrieves only one meaning among the many possible meanings by the shortcut of divination or the longer route of probability. The expressive act itself is never reconstituted in its necessity.

Can any one interpretation exhaust all possible meanings of a dream? This almost certainly should be exceedingly rare if possible at all, and would in those rare instances be aided by the particular dreams themselves more so than their interpreter. Moreover, there are some dreams that both analyst and patient just cannot understand. This too should not be forgotten as a reminder that the dream and the dream state have nuance and multiplicity of meaning that mostly lay beyond our reach even when we do make head-ground in tackling the lower ends of what is fathomable. What is of greater importance to us in the above passage is the danger of holding our theoretical speculations and hypotheses based on intuition (the act of intelligent guessing and cross-referencing that Foucault refers to as ‘divination’) as reference points in our mind that we try to affirm with further inquiry into the dream, such that we feel more and more confident that we are hitting the mark when really what we are doing is corroborating what we have hypothesized to be the one meaning of a dream (the process of ‘probability’ in meaning). Every dream is in a certain sense unique, no doubt, but what is of focal interest here is how, regardless of the content, different dreams stylistically convey that uniqueness according to their ‘language’, quite independent of their complexity.

Different people have different dreams, and the same person has different dreams on separate occasions and, furthermore, of differing type and complexity; but the state of dreaming itself, the nature of the primacy of the dream world itself, is what we shall explore as a persistent system of features when carrying or conveying meaning.

Based in Oxfordshire,
Providing Online Therapy within the UK